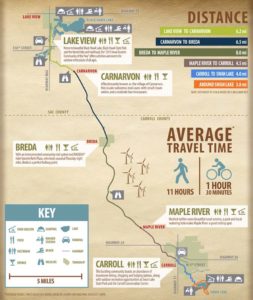 The Carroll City Council has approved providing $100,000 in matching funds if a state grant application to repave part of the Sauk Rail Trail comes through.

“I have to say after we discussed a while back a couple of people said they’re happy we’re expanding, but they also know upkeep and maintenance is so important, too,” she says, “so there is enthusiasm for this.”

The trail is eight-feet wide and Carroll City City Manager Mike Pogge-Weaver says the plan would be to put a five-inch concrete surface on top of the asphalt.

“There are some areas where the trail has deteriorated to a level where they’ll remove existing asphalt and replace with concrete and then additionally, under bridge underpasses, they’ll remove the asphalt and put in concrete, so they don’t raise the level in those areas,” he says, “just for clearance reasons.”

The Carroll County Board of Supervisors also has voted to provide $100,000 in matching funds if a $1 million state grant comes through. The Iowa DOT has has set aside $5 million for repairing trails and grant applications are due next week.