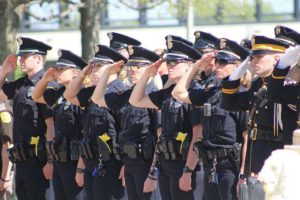 Sheriff Tony Thompson says they never want the families of those who have given their lives to think those sacrifices have been forgotten. Sheriff Thompson says, “This event every year is more so reminding both the community as well as the families that these are our brothers, our sisters, that have fallen in the greatest sacrifice in our profession, and that is laying down their lives for the safety of others.”

The murder of George Floyd, protests and riots, efforts to defund police departments and more have forced those who wear the badge to “dig deep,” according to Thompson. “We’ve had a very tough year in law enforcement,” Thompson says. “We’ve had acts within our profession that have brought discredit to our profession, and yet on top of that, the pandemic and everything else. It’s just been a very difficult and challenging year.”

Despite that, the sheriff says he’s optimistic today’s ceremony will be about more than remembering the sadness and losses.
“The theme of this year’s event is not just a solemn reflection but hopefully a bit of a celebration,” Thompson says. “We are coming out of what has been a very challenging and very difficult year and the ability to look forward to what the future brings for us.”

A portion of today’s event will be dedicated to remembering one of the darkest times in Iowa law enforcement history 40 years ago. On July 12, 1981, Waterloo police officers Wayne Rice and Michael Hoing responded to a complaint of loud music at a home two blocks from city hall. After a confrontation, James “T-Bone” Taylor took Rice’s gun and killed both officers.

Taylor fled and eluded capture for several days. After a nearly week-long manhunt, he was caught in a bean field near La Porte City and eventually convicted of murdering the 27-year-old Rice and 28-year-old Hoing. The search for Taylor also led to the death of a third local officer.

Two days after Rice and Hoing were gunned down, Black Hawk County sheriff’s deputy William Mullikin died in a traffic accident while responding to a reported sighting of Taylor.