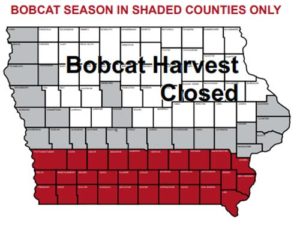 The DNR’s Todd Bishop says 20 of 23 comments in Dubuque County were against adding the bobcat season. He says they decided to pull Dubuque from the list and do some outreach and surveys on the issue.

Bishop says the opposition came from landowners and it was not against bobcat hunting — it centered on numbers. “And they gave specific examples of they felt like the population wasn’t in a place — they weren’t seeing enough bobcats to warrant a season. Very specific to their observations on their land, things like that,” Bishop says.

Bishop says it can be hard to get a handle on the bobcat populations as they are an animal that stays away from people as much as possible. He says the DNR is very conservative in deciding when to add a season and will work more with the residents before moving ahead. This new rule allows trappers in Delaware and Jones Counties to take one bobcat.

There are now more than 40 counties where you are allowed to take a bobcat.