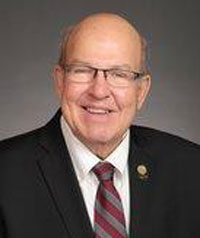 Early this morning, an Iowa House committee approved a bill containing a series of tax changes, but Republican Representative Gary Mohr of Bettendorf acknowledges it may not include all the tax changes Senate Republicans want.

“As far as I know, it’s in its final form,” said Mohr, who is chairman of the House Appropriations Committee, “but at this stage of the session, I don’t take that to the bank.”

Senate Republicans voted in early April to use state tax dollars, rather than local property taxes, to finance the state’s mental health system. House Republicans have so far resisted and the proposal is not included in the tax bill that cleared the House Appropriations Committee today. House Speaker Pat Grassley says there are technical questions to figure out before the state takes over another social program.

By mid-morning, members of the legislature had retreated into private meetings to discuss tax and spending issues. As is the custom, though, legislators began their day with public prayers on the House and Senate floor. Representative Steven Bradley, a Republican from Cascade, prayed in the House.

“God our heavenly Father, we come before you as we hopefully begin our last legislative action week,” Bradley said.

The prayer in the Senate from Republican Ken Rozenboom of Oskaloosa was less specific.

“We’re here today to make decisions that affect all of our fellow Iowans,” Rozenboom said. “It’s my prayer that you will guide our conversations and our decisions.”

Republicans hold a majority of seats in the Iowa House and Senate and decide what gets debated and passed in the legislature. Democrats say they support many of the concepts Republicans are discussing when it comes to spending and tax decisions, but they’re being excluded from negotiations.