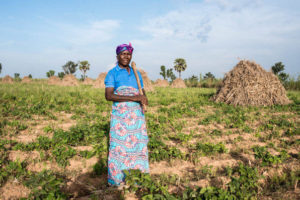 Iowa’s largest manufacturing employer is being recognized for the success of its farming education program in Nigeria.

Out of more than four-thousand applicants, Fast Company magazine has named Deere the winner of its 2021 award for World Changing Ideas, which stunned Nate Clark, president of the John Deere Foundation.

“We’re still pinching ourselves about it,” Clark says. “It’s powerful confirmation that when people look at opportunities or activities that can change the world, that they realize that farmers play an important part in making the world a better place.”

Rayuwa means “life” or “livelihood” in the Hausa language and according to data from its inaugural year, the project is living up to its name. Nigeria experienced a 10-percent decrease in food scarcity during the summer of 2020 — a time of the year known as “hunger season.”

Lekan Tobe oversees the Rayuwa project and says the program weathered the pandemic because he hired team members from the 11 target villages.

“Most of the guys are actually in the village, some right in the community, some 5-10 minutes from the village,” Tobe says.

Three months before harvest season, farmers in the region run low on food, and a lack of steady income depletes their savings. But despite a global pandemic and growing poverty in Nigeria, these farmers produced more and earned more — about one-point-three million dollars more.

While the program started with 2,500 veteran farmers and 4,000 newcomers, Tobe says the total number of participating farmers in the region now tops 8,000. This year, the Rayuwa project hopes to expand from 11 villages to 21.