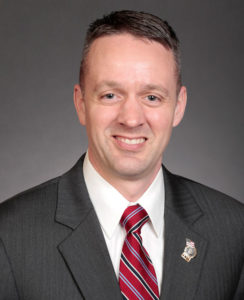 Iowa will no longer be the only state that uses property taxes to finance its mental health system. After weeks of negotiations, Republicans in the legislature now have a compromise tax plan that includes that change.

“It’s taken a bit longer to get here folks simply because we wanted to stand firm on our principles and make sure we got this thing done right,” said Senator Dan Dawson, a Republican from Council Bluffs.

Senate Republicans voted for the move a month ago. Governor Reynolds signed off two weeks ago. Now, House Republicans say they support it since the bill spells out how the state would pay for and manage the mental health system once that property tax levy is eliminated.

The proposal is part of a massive bill that includes tax credits to boost housing and child care. The bill eliminates the state inheritance tax. It also gets rid of a review of total state tax revenue that could have prevented income tax cuts from taking effect. Dawson was among the 27 Senate Republicans who voted for the bill.

Two Democrats in the Senate voted for the package, but 15 Senate Democrats voted against it. Senator Pam Jochum, a Democrat from Dubuque, said she fears future legislators will abandon the promise to pay for mental health services.

“There is no guarantee — none — that this state will make good on its promise to adequately fund mental health and disability services,” she sad.

Other Democrats objected to ending state payments to cities and counties to cover a 10 percent commercial property tax cut the legislature ordered in 2013. Senator Jackie Smith of Sioux City, a Democrat, was a county supervisor back then.

“We had fears this would happen…that the state would break its promise,” Smith said. “…This is the only part of the bill my mayor, my city council reached out (to me) on. They’re afraid they will have to cut services.”

Republicans say one group of legislators cannot make binding budget decisions for legislators in the future. The tax package that cleared the Senate tonight would cut Iowans’ taxes by $1 billion over the next eight years according to Senate Republicans. The bill has to pass the House next before it goes to the governor.