You are here: Home / News / After that wicked derecho last year, twisters and t-storms prove rare in 2021 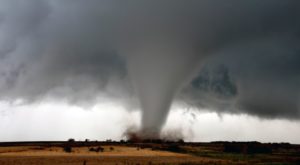 Nobody really wants to see this, right?

Iowa is on track to have one of the quietest severe weather seasons in history. Senior meteorologist Brad Small, at the National Weather Service in Johnston, says their office covers 51 counties across western and central Iowa and practically the only time the warning sirens have wailed this year has been during the monthly tests.

By comparison, the busiest year for severe weather was 2001, a year in which there had already been more than 200 warnings by this date. Small says the last time a tornado warning was issued by his office was in July of last year.

Eastern Iowa has seen two relatively small tornadoes this year so far, but ordinarily there would’ve already been at least a dozen statewide. Iowa saw a total of 28 tornadoes touch down last year, which is well below the average number of around 50.

As for this year, Small says conditions simply haven’t been conducive for strong storms.

“For severe weather, we need instability, which is the warmth and the moistness in the air mass that we have in place, and we also need wind sheer, shallow and deep for tornadoes, and we really haven’t had either of those to a great degree,” Small says. “The season hasn’t been particularly warm yet.”

Small assures he’s not tempting fate by calling attention to this being such a quiet season, as virtually nobody is itching for a tornado to spin out of black clouds on the horizon.

The forecast does call for the possibility of warmer weather and thunderstorms later this week, but Small says overall, the chances for severe weather threats remain low.