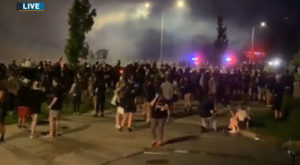 One of the bills to clear the Iowa legislature in its final week raises the penalty for rioting to a felony. Lingering in the crowd when a protest becomes an “unlawful assembly” would become a crime. Representative Jarad Klein, a Republican from Keota, said the bill sends a clear message.

“Peaceful protesting is a great and wonderful thing, so many positive results have happened in our country as a result of peaceful protesting, but violence cannot and will not be tolerated in the state of Iowa.”

The bill also provides police qualified immunity to shield them from being held personally liable for most on-duty actions. Governor Reynolds unsuccessfully recommended including a ban on racial profiling in the package, too. Representative Ras Smith, a Democrat from Waterloo, said Republican lawmakers have abandoned the criminal justice effort that started a year ago.

“Just because you’ve chosen to turn your back on the hard work doesn’t mean that I will,” Smith said. “I’m naïve enough to keep pushing forward. I’m so afraid to become a Drew Edwards or a George Floyd moment that I cannot conceive stopping.”

Drew Edwards died in Maquoketa nearly two years ago after two officers knelt and sat on Edwards for about 10 minutes during an arrest.  In 2020, the City of Maquoketa and Jackson County agreed to pay his family $4.5 million to settle a lawsuit alleging police used excessive force. The officers involved were cleared of criminal wrongdoing.