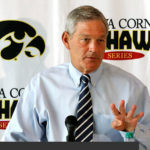 Former quarterback Jason Manson has been named Director of Player Development for the Iowa football program. The announcement was made by head football coach Kirk Ferentz.

“I am happy to bring Jason Manson back to our program in this capacity,” said Ferentz. “Jason was a valued team member and leader during his Iowa career. His perspective and experience since graduation will be a great benefit to our players in his new role.”

The Director of Player Development serves as a guide for student-athletes as they transition from high school to college, supporting their academic and football successes while creating a positive and memorable college experience. Former Hawkeye Sam Brincks has been the interim director for the role over last 10 months.

“I appreciate the contributions Sam made for our program as the interim director,” said Ferentz. “I am thankful that he stepped right in and provided positive feedback and leadership for our current players.”

Manson has been involved in high school administration and coaching since the end of his Hawkeye playing career. He has held the position of assistant Dean of Students and head football coach at St. Thomas More School the last two years. In 2018-19 he served as student management assistant at Greater Hartford (Conn.) Academy of the Arts and head football coach at Capital Prep

As a player at Iowa, Manson lettered in 2005 and 2006, playing both quarterback and wide receiver. His career totals include completing 42-85 pass attempts for 442 yards and one touchdown. He had 22 career rushing attempts for 93 yards and three pass receptions for 22 yards. Manson led Iowa to a double-overtime win at Syracuse in 2006 in his only start at quarterback.