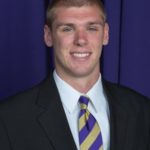 UNI men’s basketball coach Ben Jacobson has announced the promotion of video coordinator and former All-American Seth Tuttle to his staff as an assistant coach.

Tuttle joined the staff in 2018 as a graduate assistant before moving to the video coordinator position in 2020. His influence and experience was key in installing UNI’s current offense and his experience as a high-level player has given the Panther team another important voice in the room.

“We are thrilled to add Seth as an assistant coach,” said Jacobson. “As a player and most recently as our video coordinator Seth has brought great passion and energy to everything he’s been a part of. His numbers as a player speak for themselves, but I’m most proud of who he is as a person, a teammate and a leader. He takes tremendous pride in our program, our university and our community which will continue to help him represent all of us at the highest level. I know Seth will be great in this role and he’s ready to get to work”

“I am beyond excited to be hired as an assistant coach here at UNI” said Tuttle. “Being a former player I am aware of the tradition and passion that comes with being a part of UNI basketball. I don’t take this opportunity lightly and can’t wait to help continue the success this university and its fans deserve. I am thankful for being able to learn and work with Coach Jacobson and his staff these last two years. This is a dream come true and I cannot wait to get started.”

One of the most decorated players in UNI history, Tuttle played for the Panthers under Jacobson from 2011- 2015, leading the Panthers to a MVC Championship and an NCAA Tournament victory over Wyoming. Tuttle was the MVC Freshman of the Year in 2012 and named First Team All-MVC in 2014 and 2015 while being honored as the league’s Larry Bird Player of the Year in 2015. Following the 2015 season Tuttle was named a Second Team All-American by the Associated Press and a Third Team All-American by USA Today.