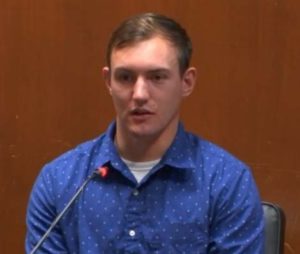 The boyfriend of murdered University of Iowa student Mollie Tibbetts spent the most time on the witness stand Tuesday as the defense tried to paint him as an alternative suspect to accused killer Cristhian Bahena Rivera.

Defense attorney Chad Frese questioned Dalton Jack about an affair he had with a woman named Jordyn Lamb that led Tibbetts to take off her promise ring. Frese asked Jack if he knew why Tibbetts took off her promise ring and he said it was because of his relationship “our affair I guess you would call it” with Lamb.

Frese questioned Jack extensively about text conversations they had on various issues.
He asked Jack if he mentioned to Mollie that he had a temper and Jack said he didn’t remember. He also asked if he told Mollie “that a person can’t tell until you see it in action.” The prosecutor objected to the question as hearsay, and the judge agreed.

He questioned Jack about another time when they had relationship issues.
“You recall on October of 30, 2017, you and Mollie’s relationship kind of hit a real bump, didn’t it,” Frese said. Jack said he didn’t recall. “That’s when she was moving in with friends,” Frese says. Jack says it did remember that. You told her you were angry … and she was ditching you. That’s the term you used right?,” Frese said. “Yes,” Jack replied.

Frese also questioned whether Jack was really away working on a construction crew at the time Tibbetts was abducted while out running. “The details were few and far between as far as the specificity of your activities on the evenings of July 18 and July 17 to investigating agents, right,” Frese asked. “I thought they were pretty clear,” Jack replied. “You couldn’t recall what night you got drunk and what night you stayed in the room, could you,?” Frese asked. “I don’t recall saying that,” Jack said.

Prosecutor Scott Brown followed up trying to make it clear Jack was not a suspect.
“Have you ever admitted that you were in Brooklyn, Iowa on July 18th of 2018 near where Mollie Tibbetts was observed running,” Brown asked. “No I have not,” Jack said. “Have you ever made any statements mister Jack placing you on 385th Avenue east of Brooklyn on July 18th in the evening hours?,” he asked. “No I have not,” Jack said.

He summed it up with this question.  “Mister Jack, did you have anything at all to do with the disappearance or murder of Mollie Tibbetts?,” Brown asked. “No,” Jack replied. The testimony will continue today in Davenport at 8:30 a.m. as the defense continues its case.