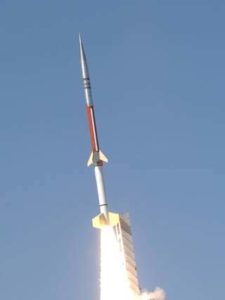 A small group of space scientists from the University of Iowa is in coastal Virginia to witness the launch of a rocket with instruments onboard they designed and built.

Earlville native Andrew Carton graduated from the U-I in May of 2020 with a degree in electrical and computer engineering. Carton now works with the U-I Space Physics program and helped develop elements inside VIPER, which is scheduled for launch late tonight.

“VIPER is going to be testing a Navy broadcast signal for submarines,” Carton says. “Our job is to see if we can pick up their signal on our instruments and hopefully that will give the Navy some feedback as to whether their satellite is going to work across the globe.”

Other instruments on board will measure electromagnetic fields from radio waves traveling in the ionosphere, in hopes of better understanding the basic physics that occur in the envelope between Earth and space.

The sounding rocket will be launched from NASA’s Wallops Flight Facility and Carton says he’s thrilled to have been picked to see it blast off up close. “Most of my work during VIPER was testing the final flight board so I was really excited to get the opportunity,” Carton says. “For this to be my first rocket launch and get to go see it in person, especially after everybody has been locked up and no travel over the last two years, it’s a really great excuse to get out of Iowa City.”

The two-stage Terrier-Improved Malemute rocket will carry the VIPER payload to an altitude of about 94 miles before it falls and splashes down in the Atlantic Ocean.

“I think the cool thing is, it’s not as big and as grand as a space shuttle or a Saturn V or whatnot, but they do leave much quicker,” Carton says. “They say don’t blink with a sounding rocket because you’ll miss the whole thing. It just goes, so I’m really excited to see that and hopefully not miss it.”

The launch window is between 9:15 p.m. and midnight/eastern, so it should be a spectacular show, momentarily lighting up the nighttime sky.