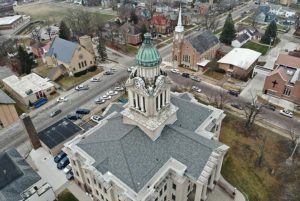 The Iowa Department of Cultural Affairs has approved federal grant money for five historic sites across the state.

He says there is a lot of restoration work to do. “They are going to do exterior work to the dome to prevent further water damage and will be looking at character-defining interior finishes including ornamental plaster, hand-painted murals, and art-glass dome, and intricately detailed woodwork taken care of,” according to Morgan.

Clayton County will receive $125,000 to rehabilitate the circa 1870 stone inn at the Motor Mill Historic Site. “And their plans include flood-proofing the main floor and installing new mechanical systems. The interior will be rehabilitated to include meeting rooms, office space, and guest rooms for overnight accommodations — it’s a throwback to the building’s original purpose — and that’s part of the project they’ll be doing there,” he says. 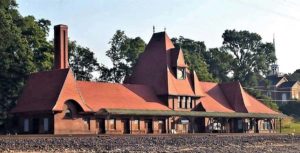 The City of Keokuk is receiving a grant of nearly $113,000. “They are going to be restoring the windows, doors, and exterior masonry of the central tower section of the Keokuk Union Depot. It’s an 1891 structure and it was designed by the renowned Chicago architectural firm of Burnham & Root,” Morgan says.

The city of Muscatine and the Muscatine Art Center have won a $122,000 grant to renovate the 1929 Japanese Garden in the Historic District. “Japanese-style gardens were very popular in the United States from the 1890s through the early 1940s, but most were destroyed during World War Two,” Morgan says. “The Japanese garden in Muscatine is one of the few remaining from this era in the entire midwest. So this project is going to preserve the garden’s historic features and character while improving its function as a public space.”

The City of Creston is receiving a grant of $114,800. He says they plan to rehabilitate the historic 1899 Chicago, Burlington, and Quincy Railroad Station, one of the oldest and largest active train depots remaining in Iowa. The building now serves as city hall, a senior meal site, an art gallery, and an Amtrak station.

“The preservation of this building will draw positive attention to the important history of railroads in Creston and the state,” Morgan says. The grants are funded by the U.S. Department of Interior’s National Park Service. Iowa is one of just eight states to receive the funding.