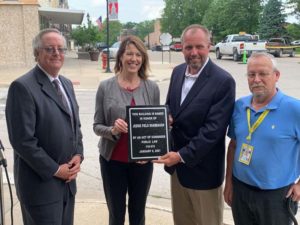 The U.S. Post Office in downtown Clarinda now bears the name of a woman who’s been called the “mother of 4-H clubs.”

Jessie Field Shambaugh was a school teacher in Page County when she formed the Boys Corn Club and the Girls Home Club in 1901. Seth Watkins is a farmer in the Clarinda area and Shambaugh’s youngest grandson.

“This honor is very special to our family, but it’s also for all of us. I mean, 4H touched the lives of so many people,” he said. “I guess I hope that when we go by and see our name on the building, it just reminds all of us to continue to make our best better and follow that motto. It’s just a good rule for life.”

Mark Talbott, district manager, for the Iowa-Nebraska-South Dakota region of the Postal Service, said Shambaugh left a lasting legacy for youth throughout the country.

“She designed a three-leaf clover pin with the letter H on each one of the leaves, representing Head, Hands and Heart. She added the fourth leaf for Home which later became known as Health,” he said. “The pin was used as an award medal for outstanding club work.”

Congresswoman Cindy Axne of West Des Moines was the lead sponsor of the bill that renamed the Clarinda Post Office in Shambaugh’s honor. Axne was a 4-Her.

“It was about being a part of your community, bringing something to your community that you could share together and teaching people new things and growing together and how I met a lot of my friends,” Axne said, “so it really means a lot to me.”

Axne was in 4th grade when her family moved to West Des Moines and her mother told Axne and her sisters they were going to start a 4-H club.

“We just remember getting our girlfriends together and starting up this club and then learning stuff we thought was really pretty cool,” Axne said.

A dedication ceremony was held at the Clarinda post office earlier this week. Shambaugh died in Clarinda in 1971 at the age of 89.