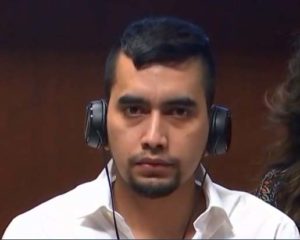 A jury has found Cristhian Bahena Rivera guilty of first-degree murder in the death of 20-year-old college student Mollie Tibbetts in her hometown of Brooklyn.

The jury in Davenport started at 8:30 this morning, broke for lunch, and then came back for a total of just more than seven hours before reaching the verdict.

Tibbetts was reported missing after she went for a run in July of 2018. A month later Bahena led authorities to her body in the middle of a cornfield. Bahena testified Wednesday in his own defense and for the first time told a story that two masked men forced him to follow Tibbetts as she ran and one of them killed her.

Prosecutor Scott Brown admitted to sleepless nights as the trial progressed, but stressed during a news conference in Davenport that the trial was about Tibbetts and her family.

“Even though we would never have the ability to bring Mollie back, we hope moving forward they know the person that did this to her is going to be held fully accountable.” Brown and Poweshiek County Attorney Bart Klaver met with the Tibbetts family privately following the verdict.

Klaver says it was an emotional moment. “Also a sense of relief is how I would describe it,” Klaver says. “I mean this case has been going on for quite a while. It’s been continued for various reasons and certainly from Covid, but to get to this point it’s been a long time coming and it’s like a weight, I think, off of everyone’s shoulders and to get the result that we did punctuates that a little bit more.”

Defense attorney Chad Frese also spoke with reporters following the verdict. “We respect the jury’s verdict, we wish it would have been different of course,” Frese says.

Prosecutor Brown says they were prepared if Bahena were to testify. “We thought at the beginning maybe it’s not likely — but as things went on as things kind of came in we thought very well for us, our witnesses did well — we thought it more likely that he would take the stand,” according to Brown. “We weren’t expecting the story that he gave.”

Co-defense attorney Jennifer Freese says it was the first time they had heard the story as well.
“You know, I think there was speculation that we made some sort of, you know, let’s figure out a story. You know, if we were going to make something up — we would have come up with something better than that,” she says.

Chad Frese says they still felt there were a lot of leads that weren’t followed through once their client was identified. “There’s a lot of people in this case whose stories didn’t check out well enough for us. And that was a problem for us. So, can we tell you who did this, no? We can tell you getting to know Cristihan Bahena, we are very surprised that he would be the type of person who would commit a crime like this,” Frese says.

Frese says they will explore their options for appeal.

(Radio Iowa’s Dar Danielson contributed to this story.)
(This story was updated to include post-verdict comments)