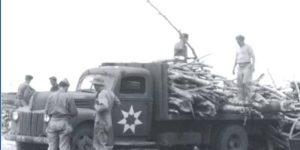 The Camp Algona POW Museum reopened on Memorial Day weekend. The museum was established in 2004 to tell the stories behind the World War II encampment for German prisoners of war, but the museum’s been closed for more than a year due to the pandemic.

Jerry Yocum, the museum’s president, and curator, says they used that time to digitize photos that are now available on one touch screen. Information about how the camp operated is available on another.

“They can go, touch the screen and get about four different categories,” Yocum says, “look at those and have a short interview or a short section on people that may have been prisoners there or women in the camp, probably a bit about the nativity scene as well as the American military that was there.”

In 1945, six German prisoners created a 20-by-40 foot nativity scene, which is on display at the Kossuth County Fairgrounds. Yocum remembers as a boy riding in a busload of Germans when the POWs were dispatched to clean up after a tornado nearby.

“But we also had a lot of work done in our area where farmers needed work,” Yocum said. “If you had a family of 10 and five of them were boys, chances are a lot of them were going to be in service and so you needed the farm help and that’s what these prisoners were able to do for the farmers.”

The POW camp was leveled after the war and a National Guard Armory and the city’s airport occupy the land today. The museum, located in downtown Algona, is now open 10 a.m. until 4 p.m. on weekdays. Weekend hours are from 1 to 4 p.m.