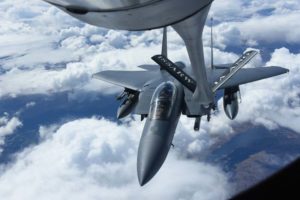 Sioux City’s 185th Air National Guard Refueling Wing has been participating with Air Guard units from Maine and Ohio in a first-of-its-kind missile defense exercise in the United Kingdom.

Major Noelle Jacobs is one of the Iowans taking part. “Part of the uniqueness of this mission is we can get with a unit from Ohio or Maine, as we have been this week, and work with them to get the mission done –whether it’s the maintainers we are using or the actual crews themselves,” Jacobs says.

The exercise has more than 3,000 participants from the European nations of Belgium, Denmark, France, Germany, Italy, the Netherlands, Norway, Spain, the UK and the U.S. The mission is hosted by the U.S. Naval Sixth Fleet and the British Royal Navy in the Western Isles of Scotland and covers the areas of the North Sea and Atlantic Ocean.

“Obviously here in the United Kingdom we have a lot of inclement weather, so that’s one thing that’s affected us over the last week — trying to kind of roll with the changes of the ever-changing weather here,” Jacobs says. The K-C 135 air operations are staging out of the Glasgow-Prestwick Airport in Prestwick, Scotland.