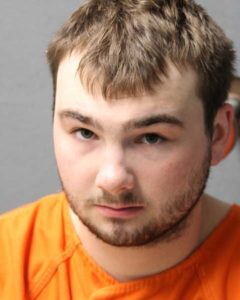 A Whiting man is in custody and charged with second-degree murder following a Memorial Day shooting in rural Woodbury County that left one person dead and another injured.

“Upon arrival, a female and male were found in the front yard of 1932 250th Street, suffering from apparent gunshot wounds,” Sheehan says. Forty-year-old Russell Mohr or rural Mapleton died at the scene of the shooting. A woman who has not been identified was shot in the leg and hospitalized with what are called non-life-threatening injuries.

Sheehan says they had a good description of a vehicle and a deputy spotted it on Highway 141 less than 20 minutes after they arrived on the scene. He says a witness called in and reported seeing the vehicle and the deputy stopped it and the driver was taken into custody without incident.

Sheehan says the shooting suspect and the victims knew each other — but the motive for the shooting is not known at this time. He asks anyone with information on the shooting to call the sheriff’s department at 712-224-3333.