You are here: Home / News / Heat Awareness Day arrives just as the heat is on 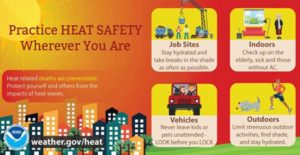 Eastern Iowa had frost warnings with low temperatures in the 30s just last week, but summer-like weather is settling in now, as forecasters say highs will climb into the 80s and 90s over the next few days.

Today is Heat Awareness Day and meteorologist Jim Lee, at the National Weather Service in Johnston, says it’s a reminder of the hazards of hot weather.
“Anytime we see high levels of heat and humidity here in the summer, which is fairly common especially as we get toward the dog days of summer,” Lee says, “anytime anybody’s working outside, they need to be aware that time in the sun and time of physical exertion can lead to heat stress syndrome.”

Parents and anyone who cares for kids also need to be reminded about the dangers of these quickly escalating temperatures. “We see multiple times per year, children who die left unattended in vehicles,” Lee says. “It is very important to never leave your child in a vehicle unattended for any length of time and also to be aware of who’s in the back seat and, as they say, look before you lock.”

It’s a coincidence this Heat Awareness Day arrives precisely as the forecast calls for a heatwave. “We are looking at the warmest weather of the season so far coming over the next multiple days and through the weekend,” Lee says. “It’s more important now than ever to make sure you take your heat health seriously. If you’re outside this weekend, drink plenty of fluids and take some breaks in the shade.”