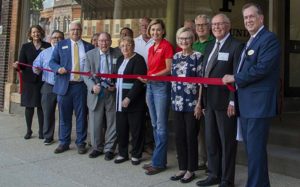 Buena Vista University has opened a 2,500 square foot building in downtown Storm Lake that’s being described as an “idea incubator.”

It’s called “The Foundry” and BVU president Brian Lenzmeier says the space is for students as well as businesses and entrepreneurs in the community.

“This is a place where visiting businesspersons can idle for a while when they’re in town, bounce ideas off of colleagues, conduct meetings, do research and establish new contacts,” he says, “making connections to build out their businesses.”

The Foundry is already home to a tech start-up called Levity. It was launched by two computer science majors who graduated from B-V-U in 2020. Lenzmeier says there’s plenty of office space for other start-ups as well as open space for meetings and for self-employed people to share equipment and ideas.

“It’s a place where budding entrepreneurs will be connected to not only the university, but to our Storm Lake community, to Buena Vista County and to northwest Iowa,” Lenzmeier says.

Gary Sterling, The Foundry’s manager, started to get calls when details about the project were released earlier this year.

“I had one call specifically from Sioux City, one from Spencer with people actually asking: ‘Can I use your space? Can I use it to interview people? Can I use it to have a small meeting?’ And I’d say: ‘Well, we’re not quite there yet. We’re close. but give me your name and I’ll make you know when this is ready to go,'” he said, “so with that I knew we were doing the right thing.”

The Foundry is part of the Donald and Charlene Lamberti Center for Rural Entrepreneurship at Buena Vista University. Lamberti, the founder of Casey’s General Stores, donated $2.9 million to BVU in 2019 to establish the center and The Foundry was part of that original plan. A grand opening and ribbon cutting for The Foundry was held earlier this week.