You are here: Home / Human Interest / Look! Up in the sky! It’s a partial solar eclipse! 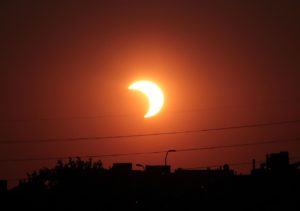 If the skies are clear, a partial solar eclipse will be visible over Iowa tomorrow morning. The moon is at its farthest point from the earth so it’s an “annular” eclipse as it won’t completely cover the sun.

Linda Burkhart, director of the Sanford Museum and Planetarium in Cherokee, says other parts of the country will have a better view but it’ll still be interesting to see.

She says areas to the east-northeast of Des Moines will see bigger sections of the sun fall into shade. Burkhart reminds, don’t look directly at the sun, but use eclipse-specific glasses or a pinhole viewer, so as not to risk eye damage.

She notes there are other things to see in the sky this month.

June 20th is the first day of summer and marks the summer solstice, a day where there will be equal parts of light and darkness. After the 20th, we’ll start to lose a little bit of light each day.