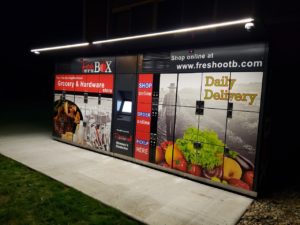 The owner of a pair of small food markets in southwest Iowa is opening two sets of refrigerated lockers in nearby communities that no longer have grocery stores.

Theo Ramsey, who runs Ramsey’s Market, with stores in Lenox and Manning, is now offering the locker service in Shelby and Walnut. Ramsey says it’s a simple system.

“Folks would shop online and if they get in their order by 5 PM, we guarantee it the next day by 5 PM, usually much earlier,” Ramsey says. “Folks would get a notification when we deliver their stuff to the locker, punch in the code, pop open the doors, grab their stuff and go home.”

Each of the outlets has 30 lockers, 15 refrigerated and 15 for frozen foods. For people who plan ahead a little, he says it’s a cost-effective, convenient way to get your groceries.

“We have delivery fees as low as free for orders of $100 or more, and then if it’s $90, there’s a $1 fee, if it’s $80, a $2 fee and so on,” Ramsey says. “It’s also a membership service similar to Amazon Prime where you have a membership monthly or an annual membership.” 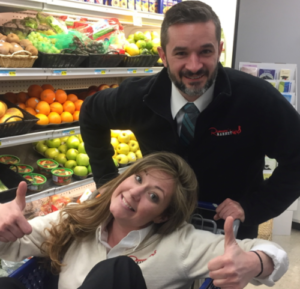 Ramsey is calling the new venture “Fresh Out of the Box,” and he anticipates it will quickly become very popular. It’s not just about the groceries, he says, but it’s also about keeping people in their rural communities and helping those towns continue to grow.

“Rural grocery stores have been closing at an alarming rate and we looked around and thought what could we do to help,” Ramsey says. “We’ve been working on this for about three years. It’s bringing convenience back to communities that have lost their grocery stores. It is a safe, socially-distanced way to shop.”

The lockers are part of a pilot program funded through Iowa Economic Development Authority’s rural initiative program. Ramsey was awarded a Catalyst Grant of $100,000 and an Empower Rural Iowa grant of $20,000 to kick start the estimated $1.9 million project.