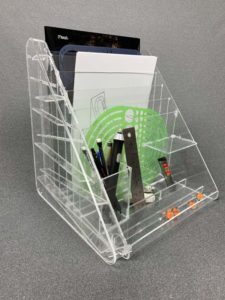 Plexiglass panels that were in such high demand at the height of the pandemic are coming down now and students at Iowa State University are finding alternative uses for the durable, clear sheets.

Merry Rankin, director of the ISU Office of Sustainability, says a professor of industrial design tasked his class with pondering the potential of plexiglass, since it’s made of acrylic and can’t be recycled.

“Oftentimes, students are given the assignment of creating a product to meet a particular function,” Rankin says. “This was the exception, where they were given the product and then told, ‘Okay, now make something functional from it.'” Students in the class started scouring for ideas by looking around the Ames campus to see how plexiglass was already being used.

“In some cases, they were seeing in buildings, for example, brochure holders made out of plexiglass,” Rankin says. “They were seeing signs on walls that had posters that would slip in and out of them according to different events 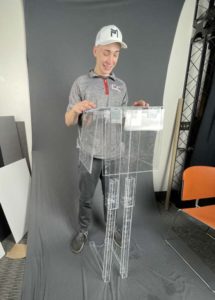 happening. In art museums, plexiglass covers a lot of the art pieces.”

The students came up with a list of new ways to use the old plastic — including carving it into decorative key fobs, picture frames, desktop organizers, and even adjustable stand-up desks.

“One student created a ring, a jewelry ring, made out of plexiglass,” Rankin says, “really to signify for the graduating class was her initial thought, but then we thought, gosh, it could be actually used for anyone as a remembrance of what we’ve been through this year.”

ISU purchased about 500 sheets of plexiglass to be used as barriers across campus, many measuring five-by-seven feet. It’s hoped none of them will end up in the landfill, which follows ISU’s Sustainability Plan. The goal is for 85% of campus waste to be diverted from landfills by 2025.