You are here: Home / Human Interest / Giant figures from ‘American Gothic’ are back in Anamosa 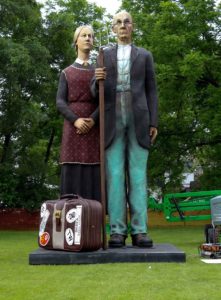 The American Gothic figures in Anamosa.

A giant version of the two familiar figures in the “American Gothic” painting are returning to the eastern Iowa town of Anamosa. The sculptures of the pitchfork-holding farmer and his daughter are 25-feet tall.

“In 2018, we were given the opportunity to have the sculpture in town and it was great,” Boone says. “It brought in tourism from all over and really helped the businesses in town. From then, we set a goal to have it back in town permanently, to purchase it.”

For now, the town is renting the sculpture, which is called “God Bless America.” Anamosa is Wood’s birthplace, which is why Boone believes it should reside there for good. She says the recognizable couple will soon be ready to be the backdrop for photos. 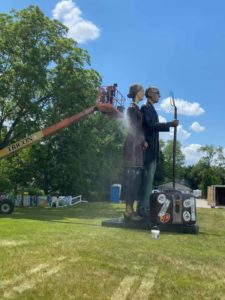 “We’ve got a local crane operator coming in and he’ll be setting it up,” Boone says. “One of the local contractors who’s working on our facade program has a lift in town that we’re going to be able to use. We’re just going to watch it happen. It’s really an amazing sight to see that get set up and we encourage people to come down and watch.”

The community is planning events around the sculpture which will be announced soon. The statues will be extremely popular photo bombers next month as RAGBRAI makes an overnight stop in Anamosa.