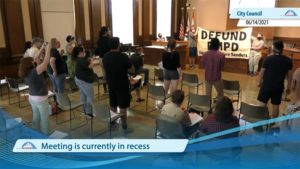 Black Liberation Movement protesters unfurled a banner that read “Defund DMPD” — the Des Moines Police Department. Chelsea Chism-Vargas was among those asking the council to reject spending $10,000 to send a Des Moines Police officer to a training exercise in Florida.

“Y’all know it’s not right,” Chism-Vargas said. “…We do not support free vacations for Des Moines police officers when they’re in our communities violating us, brutalizing us on the streets and y’all don’t say nothing about it.”

After the council approved the trip, the protesters stood and began chanting. The Des Moines City Council tried to conduct business over the shouting, but then decided to suspend the meeting and reconvene online Wednesday morning at 7:30. Mayor Frank Cownie called last night’s incident “alarming.” The council had limited the audience to 25 people for its first in-person meeting at the Des Moines City Council chambers in 14 months.