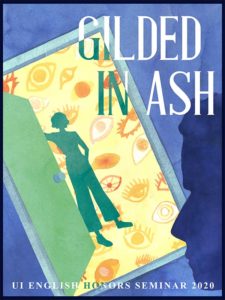 A writing assignment for a University of Iowa honors class turned into a novel that caught the attention of movie producers and resulted in all 19 students signing a film option with two Hollywood studios.

U-I Professor Harry Stecopoulos says he’s delighted by the development and while he couldn’t disclose the terms of the contract, says his students were thrilled with the deal they brokered. “There was a little bit of wrangling, as you might expect, and I should say, to the students’ great credit, they did their own negotiations with a little bit of advice from an Iowa alum who works for an agent in Los Angeles,” Stecopoulos says. “The undergrads all did their own negotiations and did them very well indeed.”

The students’ collaboration, “Gilded in Ash,” is a new version of what many regard as the greatest novel of the 20th century. The copyright on “The Great Gatsby” expired last year, so Stecopoulos had his students create a completely new telling of the classic 1925 story by F. Scott Fitzgerald. Never did he dream it would result in a film option.

“I had no expectations of this kind whatsoever,” Stecopoulos says. “I hoped they would do a good job and I had no expectations. I’m doing it again with a Hemingway novel in the fall and I fear that the students will expect a similar result, which I can’t guarantee, obviously, but it’s been a wonderful surprise.”

The original plan called for an electronic version of the students’ novel to be released in January through the University of Iowa’s Digital Scholarship and Publishing Studio, with a paperback version this spring. That didn’t happen. “The producers, for understandable reasons, didn’t want a free copy of the book circulating in case, I guess, someone else might want to make a similar film,” he says. “Some of the students are interested in revising, tightening the existing manuscript and then submitting it to conventional publishers, seeing if they can get it in book form.”

The film option was signed with Independent Pictures and Fugitive Films, but there’s no guarantee “Gilded in Ash” will ever become a movie. “The film business is fickle,” Stecopoulos says, but he’s confident the movie will be made — eventually. The characters in the new story are “largely the same but it’s a different plot,” Stecopoulos says. “For example, Gatsby is an African-American woman who is an art forger, so a major change there.”

The U-I students’ story is still set in the 1920s and in New York City but he says it’s very much an original account. So what’s the next writing project involve with Hemingway? “It’s ‘The Sun Also Rises,’ published in 1926, and that copyright expires on January 1st of 2022.”

Expiration of the copyright means anyone can publish the book, write a prequel, or adapt it however they’d like.
Stecopoulos notes, there is no payday for him with the upcycled Gatsby tale, as the only reward he craves is in his students’ success.