You are here: Home / News / Driver seriously injured after truck hit by train near Le Mars 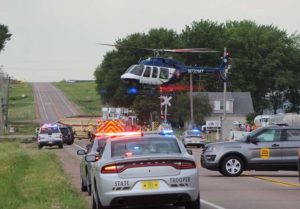 One person was injured in a truck/train crash near Le Mars. (Photo by Dennis Morrice)

One person was injured in a truck-train accident in northwest Iowa.

A semi with a gravel dump trailer collided with a Burlington Northern-Sante Fe train at about 1:15 p.m. today at a crossing about three miles west of Le Mars. The semi was coming down a hill heading eastbound and the train was going northbound. The driver was airlifted to a Sioux City hospital in serious condition.

The Plymouth County Sheriff says the crossing signals were working at the time of the accident.