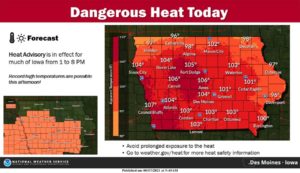 There was some thunder and lightning — but the rain totals weren’t that exciting as storms moved through parts of Iowa today.

Jeff Zogg surveyed the totals at the National Weather Service office in central Iowa, and says the heavier amounts were isolated — with about one-quarter of an inch at his office in Johnson — and some places didn’t see any rain as the showers were “kind of hit and miss.”

He says the storm only covered one section of the state.”It was primarily confined to central Iowa and then the showers and storms drifted south and dissipated as they moved south,” he says. Zogg says the temperatures climbed after the storms moved through, and many cities will likely have records. “The record high temperature for today in Des Moines for example is 94 degrees — and we’ve already gone past that. The temperature at one o’clock was 98 degrees, so we’ve already gone past that.
Records are possible at other places too,” Zogg says.

The heat is expected to spawn more thunderstorms. “Especially across the northern half of the state later this afternoon or this evening. Especially across far northern and into northeast Iowa — there’s an enhanced risk of severe weather where we could see a tornado or two, and also some large hail and damaging winds,” according to Zogg. “And those storms will drift eastward with time and probably sag south a little bit tonight too,”

Zogg says the heat will continue through the weekend. He says highs in the 80s and 90s are expected through Sunday, and then things will cool down on Monday with highs in the middle 60s to middle 70s. The chances for rain will vary widely depending on where the storms hit.