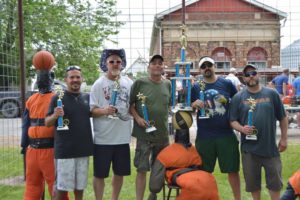 Not far from the birthplace of actor John Wayne, the tiny southwest Iowa community of Macksburg is hosting its annual National Skillet Throwing Competition this weekend.

Organizer Becky Faust says they have a pile of steel skillets of various sizes from which contestants may choose their weapons. They have to hurl the skillet underhanded about 30 feet at the head of a defenseless dummy. “We have three dummies and we have two different sites, so there’s six dummies total, and you’ll have three chances to throw a skillet at a dummy and a total of three skillets per turn,” Faust says. “The goal is to knock the basketball off the dummy. That is the head.”

Skillet chuckers come from all across Iowa and multiple other states to participate. There are typically 50 or so five-member teams in the competition. Faust says there’s a definite skill to accurately throwing a skillet and she explains the rules. “There’s two different things. You want to have a direct hit,” Faust says. “A direct hit is any way that the skillet hits the basketball directly and knocks the head off. That’s worth three points. If you hit the dummy any other way and the ball falls off, or any other way the ball falls off, that is one point.”

Not unlike the Hog Calling Contest at the Iowa State Fair, this contest’s origins are somewhat dubious but remain rooted in tradition. “This is our 44th year of doing this,” Faust says. “It started when they were having a celebration in the town and the postmaster came up with the idea to do this and it’s been going ever since.”

Each set of basketball-headed dummies is surrounded by a reinforced wire fence which is meant to keep stray skillets from braining bystanders. Faust says she’s unaware of any injuries during past contests. “If you’re up close to the competition, you’ve always got to be aware of your surroundings,” Faust says. “We try to get those fences high enough that any skillet should not be coming over the fence.”

The Madison County town, population 113, is holding a hot dog and hamburger social tonight (Friday), during which anyone can practice their skillet hurling skills. On Saturday, there will be a parade at 10 a.m. followed by other events, including a pedal tractor pull, with the skillet throwing contest starting at noon.