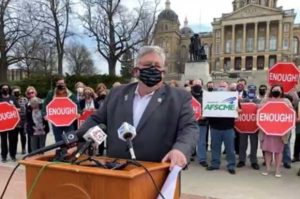 Danny Homan during a rally at the state capitol in April.

The man who leads the union representing thousands of state employees plans to retire.

AFSCME Council 61 president Danny Homan says he will retire at the end of his term and a new president will be elected at the union’s upcoming convention on July 24th. The 68-year-old Homan has been an employee of Council 61 for more than 33 years and was elected President in 2005.

Homan says in a statement that working for the union has been the “honor of his life” — and says while there is a lot of fight left in him –now is the time for new leadership to move the council forward. Homan joined AFSCME in 1986 when he worked as an officer with community-based corrections in Sioux City.

AFSCME Council 61 represents more than 55,000 members in over 230 bargaining units across Iowa, Missouri, and Kansas.