You are here: Home / Fires/Accidents/Disasters / Danger of fireworks fires increased by dry conditions 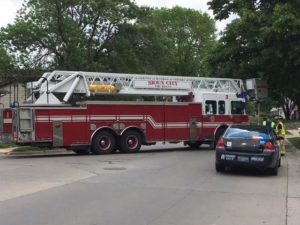 The dry conditions are raising the level of concern about the use of fireworks during the upcoming Fourth of July holiday.

Sioux City Fire Marshal, Mark Aesoph says there is a good reason to be concerned.

“It is definitely the worst conditions we’ve had since fireworks were legalized here in Iowa. Every year we’ve come out with some pretty strong safety messages — number one always being just leave them to the professionals,” Aesoph says. “This year — because of the extreme drought conditions that are going on here, we are really trying to reinforce that message. What we don’t want to see is a large increase in the number of grass fires in the area. That could lead to the destruction of property.”

He says things are so dry that fireworks aren’t the only concern. as they’ve already seen fires started by discarded cigarettes and they are also concerned about trains and people burning garbage in their back yards starting fires. Aesoph says fires can already travel quickly when things are this dry, and any wind makes things worse.

“In 2011 we had some pretty significant fires here in town just in mowed grass in a residential yard — which is not something you typically see. So this year we are going into this trying to get a strong message out,” according to Aesoph.

It is legal to use fireworks in Sioux City on July 3rd and fourth from 1 p.m. until 11 p.m. You can only use the fireworks on your own property.