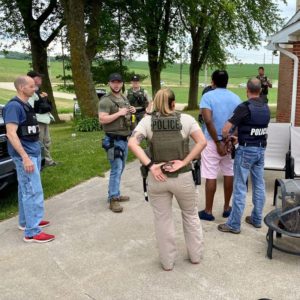 U.S. Marshals who’ve been tracking an accused drug dealer through several states for the past year arrested the man on an Iowa farm late yesterday afternoon.

In June of last year, 39-year-old Untavious Davenport was indicted by a Missouri grand jury on federal charges of conspiracy to distribute heroin and fentanyl. U.S. Marshals were called in after Davenport fled Missouri. They followed a trail to Chicago, then through other states, and ultimately to a rural area just north of the town of Zwingle, which has fewer the 100 residents.

After days of surveillance, authorities identified Davenport outside of a farmhouse according to a news release from the U-S Marshals Service and Marshals from Iowa, Illinois, and Missouri along with Dubuque County law enforcement officers took Davenport into custody. He’s being held in Linn County’s jail in Cedar Rapids as federal officials seek his extradition back to Missouri.