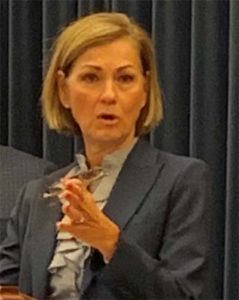 Governor Kim Reynolds has signed a deal to buy Covid-19 test kits that can be used by Iowans at home, but a spokeswoman for the Iowa Department of Public Health says details of how to get those kits will be released “in the coming weeks.”

The governor told reporters she signed the contract to buy the test kits on Tuesday “so they will be in place as we phase out Test Iowa, which our numbers are just down to nothing right now,” Reynolds said during a news conference on Wednesday.

Reynolds did not disclose the purchase price. The first drive-through Test Iowa sites were established in late April of last year as Covid cases began to spike here. By this spring, just five state-run testing sites remained. The Council Bluffs site closed yesterday. The site in Cedar Rapids will close at the end of testing late this afternoon and the Waterloo Test Iowa location is closing Friday at 4 p.m. On Friday, July 16, the final two locations in Davenport and Des Moines will close for good.

The governor says the State Hygienic Lab will be involved in distributing the at-homesays test kits for Covid 19.

“They’ll be available for anyone and there’s no preconceived conditions that quality and so we’re just moving to a better system to implement with the numbers that are going down with Test Iowa,” Reynolds said. “It doesn’t make sense to keep that infrastructure in place.”

One-hundrd-10 cases of Covid-19 were confirmed by tests reported to the state yesterday and about 47% of eligible Iowans are fully vaccinated. In some rural counties, fewer than one in three residents are vaccinated and some medical professionals fear more contagious variants of the virus may already be circulating. Reynolds said a majority of Iowa adults statewide have had at least one dose of vaccine and earlier this month Reynolds said does not plan to offer the kind of incentives or prizes governors in some other states are offering to fully vaccinated residents.

“We’re doing well,” Reynolds said yesterday. “I’m really proud of where we’re at and we’re just going to continue to talk about the importance of it.”

Iowa’s vaccination rate ranks 22nd among the states, with more than 1.4 million Iowans fully vaccinated according to the state’s website.