You are here: Home / Military / Bill named for Iowa Marine who died by suicide headed to Biden’s desk 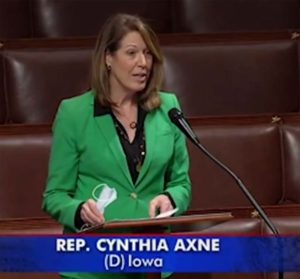 Axne talks about the bill on the House floor.

A bill named in honor of a Davenport veteran who died by suicide has passed the US Senate unanimously last night and is headed to the president’s desk.

The bill cleared the U.S. House in May and outlines steps to improve mental health care options for veterans who live in rural areas. Iowa Congresswoman Cindy Axne of West Des Moines is the lead sponsor of the bill, named in honor of Sergeant Brandon Ketchum, a retired Marine.

“Despite receiving therapy and addiction treatment after returning from his tours, Brandon had a hard time adjusting to civilian life,” Axne said, “and when he sought in-patient hospitalization in 2016 from an Iowa VA, the treatment rooms were full and he was turned down for the care he needed. Hours later, Sergeant Ketchum took his own life.”

The three Republicans from Iowa who serve in the House joined Axne, a Democrat, as co-sponsors of the bill.

“Veterans put their lives on the line and serve our nation with honor and when they come home, they should be able to receive the care that they need,” Axne said, “regardless of zip code.”

Republican Congresswoman Ashley Hinson of Marion said “not every war wound is visible” and many veterans struggle with mental health challenges when they return home.

“No veteran should ever experience what Sergeant Ketchum did in taking his own life because he couldn’t get the services that he needed,” Hinson said.

The bill would create three new programs within the Veterans Administration to give veterans who live in rural areas access to a team of mental health experts. It also requires a report from the VA on what resources may be needed to improve mental health care for veterans who are rural residents.

Republican Congressman Randy Feenstra of Hull said Ketchum’s heartbreaking death shows there’s a lack of adequate care for veterans’ “unseen wounds.” Congresswoman Mariannette Miller-Meeks, a Republican from Ottumwa who is a veteran, said Sergeant Ketchum’s death is tragic and shows the country “must do better for our veterans.”