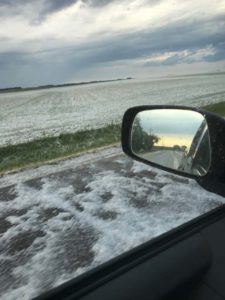 Hail in Plymouth County covered the ground and damaged crops.

Some farmers now have decisions to make after their crops were damaged by hail. Iowa State University Extension held a meeting Friday for those hit in the Plymouth County areas.

ISU Crop specialist, Joel DeJong says the hail damage appears to have started east of Le Mars. He says the damage looks to move in a southeast direction all the way east of Kingsley and north of Pierson and stops five or six miles north of Correctional.

“The center can be about as wide as two miles wide where it pretty much looks like it annihilated soybeans and corn. And then you’ve got transition areas on both sides So, it’s a very significant area that got hit,” DeJong says. DeJong says soybeans may be re-planted, but farmers also need to consider the possibility of an early frost.

“It kind of depends on what insurance policy requirements are. Each individual needs to start by visiting with their insurance agent, then we can talk about the agronomic side to see how that fits in,” according to DeJong. “We don’t have the full yield expectation of soybeans that we would if we planted in a normal time period. We get into early July and it stays wet into early July — yield expectations about a third –maybe half if we get lucky.”

He says the later the replant happens the greater the chance frost could wipe out the crop before it matures. He says farmers may be able to utilize small cereal grain cover crops such as rye, oats, or wheat. He says it’s probably early to get a cover crop established and some may want to plant forages to help supplement livestock feed. DeJong says some farmers may decide they don’t need to take any action.

“Not everybody is going to have to replant. There’s some fields on the edges it looks like we’ve got some yield loss — be the best choice is probably to salvage the crop,” DeJong says. The crop specialist reminds farmers to check first with their crop insurance company before making any decisions.