You are here: Home / News / Cotton and Grassley do push-up challenge on Sioux Center stage 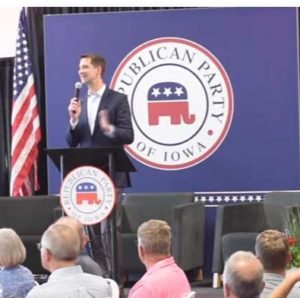 Arkansas Senator Tom Cotton, a potential 2024 presidential candidate, railed against the Biden Administration’s approach to border security and China during a speech in northwest Iowa tonight.

“It’s time, ladies and gentlemen, to lower the boom on China,” Cotton said, “for their decades of lying and cheating and stealing and, yes, unleashing a plague on the world.”

Cotton’s harshest critique, though, was aimed at critical race theory.

“If we win elections next year, if we put the brakes on the Biden agenda, if we win in 2024 — that’s all for the better,” Cotton said. “If we, however, let the left indoctrinate an entire generation of our kids to hate America, what will we have gained?”

Cotton spoke to about 150 people at a GOP fundraiser in Sioux Center. At the end of the event, 87-year-old Senator Chuck Grassley and the 44-year-old Cotton did a push-up challenge on stage as Senator Joni Ernst counted to 22. Cotton and Grassley each did 22 push ups at an event in 2016 focused on veteran suicides. Cotton’s trip to Iowa coincided with Cotton’s launch of a PAC to support Republican veterans running for congress. Cotton is an Army veteran who did tours of duty in Iraq and Afghanistan.

Cotton also joined other potential GOP presidential candidates who’ve visited Iowa this year in affirming his support for having Iowa’s Caucuses go first in 2024. Cotton told the crowd Iowa’s Republican Caucuses shouldn’t be penalized because of Iowa Democrats had problems with their Caucuses in 2020.