You are here: Home / News / Group offers to buy Milford airport, convert it to sports complex 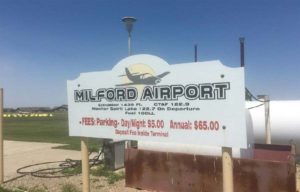 A group called the “Spirit of Okoboji” is offering half a million dollars to buy the Milford airport and redevelop the land into a sports complex. Milford Mayor Steve Anderson says an airport is an important asset for the community.

“Can we move the airport? If we can, can we get state funds? Can we get federal funds? Does it all have to be done individually by the city or can this be done with a private group? All those things are being evaluated,” he says.

The airport is owned by the City of Milford and managed by the city’s airport commission. The property is a mile northwest of Milford’s central business district. Anderson says city and county officials are reviewing options to determine how viable the proposal from the Spirit of Okoboji group would be.

“Looking at all the plans, looking at all the concepts,” he says. “There’s a lot of information coming out right now about how soon you can shut down an airport and is there an option of maybe doing this in baby steps.”

In May, an attorney for the Spirit of Okoboji told Milford’s City Council that the group would like to develop baseball and soccer fields as well as volleyball and basketball courts on the airport property that could tournaments to Milford.