You are here: Home / Military / Remains of Iowan killed at Pearl Harbor return to Bedford 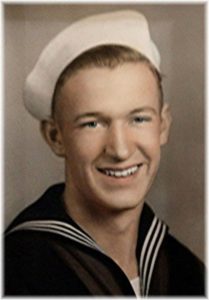 After nearly eight decades, the remains of a World War Two sailor from Bedford will be laid to rest in Iowa.

Graveside services for William David Tucker — who was 19 years old when he was killed while aboard the USS Oklahoma during the Japanese attack on Pearl Harbor — are scheduled for Wednesday morning at 10 at the Bedford Cemetery.

Larry Johnson of Parowan, Utah, is a nephew of Tucker, and was only a year-and-a-half old when his uncle was killed. “He was raised there in Bedford,” Johnson says. “His mother and father were Agnes and William Tucker. They lived on 201 Grant Street when I was a youngster. We spent the summers up there–most of us kids, you know. He graduated from Bedford High.”

After receiving three months of training at the Great Lakes Navy Training Station, Tucker was assigned to the USS Oklahoma as a fireman, working up to a first-class rating a little over one year after he had been in the service. He was transferred to Pearl Harbor, Hawaii in October, 1940.

Johnson says a twist of fate placed Tucker on the ship on that day of infamy one year later. “He was supposed to be on leave that day, from what I understand, and he traded shore leave with a friend of his, and he was just in the wrong place at the wrong time, you know,” Johnson says.

Tucker’s remains were among the unidentified Pearl Harbor dead later buried at the National Memorial of the Pacific at Punchbowl Crater in Honolulu. The U.S. Navy launched a program in 2015 to identify and recover the remains of those killed in the attack, and return them home. Through that program, Johnson says he and a brother provided DNA to the Navy–which ultimately led to a long-awaited breakthrough.

“So, the Navy contacted us last October,” according to Johnson, “and they needed DNA samples to try to get a match. Come to find out I’m the oldest living relative. The identification of the remains was made in December of 2020.”

The Navy elected Johnson and his wife to decide on the final resting place for Tucker’s remains. Johnson says the family decided Tucker’s body should be brought home to Bedford–and provide the sense of closure his family had sought for decades.

“It’s kind of amazing, really, after 80 years,” he says. “You know, it’s been that long. My mother and my other three aunts were his sisters. They never gave up on being able to get any closure, and bring him home.”

The body was recently flown to a Nebraska airbase, then transported to Cummings Funeral Home in Bedford. Tucker will be buried with full military honors. Tucker could be the last Pearl Harbor victim laid to rest under the Navy’s program, which will close on December 7th–the 80th anniversary of the attack.