You are here: Home / News / Biden signs bill named in honor of Iowa vet who died by suicide 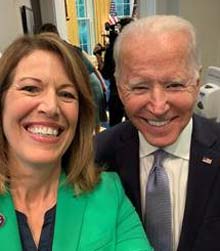 Congresswoman Axne with President Biden at the bill signing.

Three of the Iowans serving in the U.S. House were in the Oval Office yesterday as President Biden signed a bill named for an Iowa veteran who died by suicide five years ago.

“When he connected with Bev, Sergeant Ketchum’s mother, there was not a dry eye in the room,” Axne told Radio Iowa today.

The law creates three new VA teams to connect veterans in rural areas with mental health experts. Axne, a Democrat, was the bill’s lead sponsor. “Just so pleased to honor Sergeant Ketchum with this bill,” Axne said, “and it’s been years in the making and it’s so needed.”

Congresswoman Ashley Hinson of Marion was the lead Republican co-sponsor and she recorded a video statement as she walked to the White House for yesterday’s bill signing.

“I will always work across the aisle to work on behalf of Iowa’s veterans,” Hinson said in the video she posted on Twitter, “and I know that this legislation will truly help veterans in Iowa and across the country.”

Republican Congresswoman Mariannette Miller-Meeks of Ottumwa also signed onto the legislation. In a statement posted on Twitter, Miller-Meeks said the new law will help many veterans get the mental health services they need and she was proud to have been present to witness the bill signing.