You are here: Home / News / Removal of tree debris from derecho substantially completed in Cedar Rapids 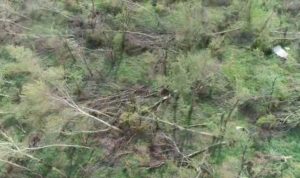 Cedar Rapids officials say after more than 10 months of work, the collection of tree debris that the August 10 derecho left behind has ended.

This includes what property owners piled at the curb as well as downed trees and uprooted stumps from city-owned property. Deputy City Manager Sandi Fowler says by one estimate at least 675,000 trees in Cedar Rapids were toppled by the derecho.

“It has been a monumental effort that has taken resources, honestly, that it’s hard to even imagine in retrospect,” she says.

City crews and private contractors worked in the days right after the derecho to clear tree debris from streets. Since then, contractors have been systematically clearing tree piles and hauling the material to staging areas where it was converted into mulch.

Crews are working along city streets and in parks to fill holes left behind when the large root systems from mature trees were removed. Fowler says the scope of the disaster is immense.

“In Cedar Rapids last fall you would drive around the city and find piles of enormous trunks and logs of trees to just piles of limbs and limbs and limbs,” Fowler says, “some 10 and 15 and 20 feet high at the curb in front of at nearly every residence.”

Curbsides and parking areas were filled over and over again with logs and limbs. There are a few piles left, but Fowler says pick-up is “substantially complete.”

“All over town probably the most striking thing to Cedar Rapids residents is you used to not be able to see landmarks from certain areas and that tree cover is gone,” Fowler says. “There is a great sense of loss. The trees are noticeably missing in many areas of our community, but it looks better than when the trees were toppled.”

The debris piles and mulching stations are being cleared out. Property owners who still have wrecked trees and debris, but don’t have the means to deal with it can call a non-profit Cedar Rapids agency called Waypoint for assistance. Re-leaf Cedar Rapids is developing a plan to restore the tree canopy in Cedar Rapids with native trees, but Fowler says it will take decades to replace the hundreds of thousands of trees that were lost.