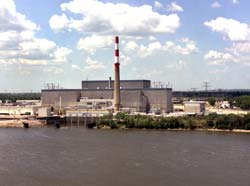 The drills conducted for the Cordova, Illinois facility are part of regular, planned tests to prepare first responders for nuclear accidents. Tom Morgan, a spokesman for FEMA Region Seven, outlined some of the standards officials must meet during the drills.

“How do we assess the accident? The nuclear power plant itself does an assessment of radiological materials that have been released,” Morgan says. “The state and or local agencies are also responsible to do an independent assessment of that so we can get a good picture of what is actually out there, potentially affecting the public.” The nuclear plant is along the Mississippi River, some 30 miles north of Davenport and because of its location, Clinton and Scott counties were part of the drill. Morgan says FEMA officials will be watching for a host of benchmarks during the drills.

“What actions will you take to respond if there is a nuclear radiation release? How do you control the exposure of emergency workers and the public,” Morgan says. “Medical support, so if there is, for instance, a person who has been injured, who was also contaminated, we will make sure that they are able to be treated effectively.”

FEMA is still evaluating the outcomes of the drills. A final report will be issued within 90 days.