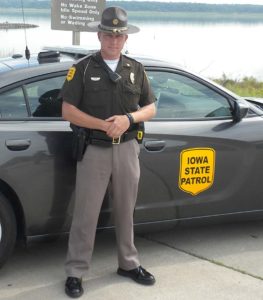 Thousands are expected to hit the roadways to celebrate summer and our country’s independence this weekend.

Iowa State Patrol spokesman, Sergeant Alex Dinkla, expects the predictions to be accurate. “The weather shows it’s not going to be too hot, not too cold. So I think we are going to have a lot of people who are traveling out to do recreational activities, as well as probably travel,” Dinkla says.

Trooper Dinkla says one thing about the roadways hasn’t changed. “We continue here in Iowa to have a major problem with people speeding on our roadways. That’s something we’ve been pushing for months now — probably the last year and a half…we cant’ stress enough for people to slow down,” he says.

Dinkla says they don’t want to keep anyone from celebrating the holiday — but they do want to be sure you and everyone else is safe on the highway. “If you chose to go out and have some fun with some friends or some family this weekend — if you’ve had anything to drink…be responsible and find that designated driver. And just please don’t drive impaired. We want you to get home safe.”

Dinkla says Troopers will be looking for signs of impaired driving. He says there have been five fatalities the last two years during the 4th, and four of them were alcohol-related. Trooper Dinkla says wearing your seatbelt is important to keep you and your family safe if something were to happen on the roadways.