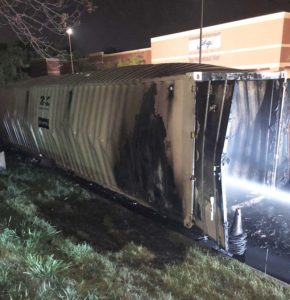 Firefighters in the Des Moines suburb of Clive had to shut down a street for two hours after fireworks in a storage unit caught fire just after midnight.

Clive Fire Chief Rick Roe says the fireworks in the 40-foot container were burning when they arrived in what he called an “extremely hazardous” situation. Roe says it appeared explosions had pushed out the sides and roof of the container owned by the Iowa Fireworks Company.

Firefighters were eventually able to put out the fire by shooting water through air holes in the container. Clive Police are trying to determine how the fire started, and the damage is estimated at $10,000.