You are here: Home / Human Interest / Iowans know their hogs but they’ve likely never seen these before 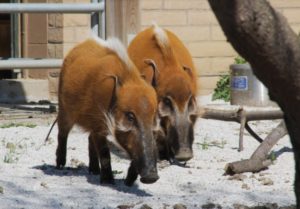 There are some 24-million hogs in the state of Iowa, about eight times more hogs than people, but two hogs that are new residents of the state stand out and could never be mistaken for any of the others.

Blank Park Zoo in Des Moines is now home to a pair of Red River hogs from central Africa.

The zoo’s Ryan Bickel says these animals are reddish-orange with very long black snouts and curly tufts of hair at the ends of their ears.

“These hogs look very different than what we’re used to here in Iowa,” Bickel says. “They’re completely covered with hair and have a rust color to them with a white stripe down their back. Very interesting looking and surprisingly photogenic.”

The pair, named Shallot and Truffle, came from San Diego and now live next to the rhino habitat. Visitors can identify the hogs individually. Shallot, the male, is three years old and has warts on his muzzle, and Truffle, the ten-year-old female, does not.

“They love to dig and root, as you would expect any hog to be able to,” Bickel says. “We actually had to take that into thought as we designed their habitat. There’s actually a fence that’s several feet beneath the surface so they can’t dig their way out.”

The main predators of these hogs are leopards — and humans. “How the keepers work with them is the same way we would work with an animal such as lion or a giraffe or a rhino,” Bickel says. “We’re never in the exhibit area with them because they could be dangerous. You don’t think of that when you think of a hog but it’s called protective contact.”

The Red River hogs are most active at dawn or dusk and spend their days wallowing in mud to stay cool and to protect from sunburn and bugs.

“Their favorite treats are nuts and meal worms,” Bickel says. “At the zoo, they have a diet of special formulated grains, fruits, vegetables, bugs, eggs, hay and alfalfa, which is similar to what they’d have in the wild.”

These creatures grow to between 40 and 50 inches in length and may weigh up to 285 pounds. They’re the only African hog that is fully covered in hair and have no bare skin showing. Zoo officials hope the pair will breed and have piglets.