You are here: Home / Business / Amazon fulfillment center warehouse in Davenport to employ 1,000 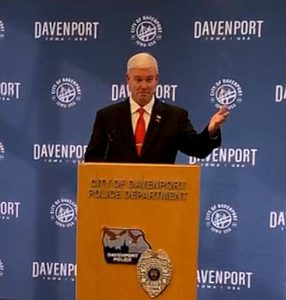 Amazon is building a 640,000 square foot warehouse in Davenport. Davenport Mayor Mike Matson says a thousand people will be employed full-time at the facility when it opens.

“Amazon will become one of the Quad City region’s top employers,” he said this morning during a news conference broadcast online by KWQC TV.

The warehouse will be what the company calls a “fulfillment center.” It’s the first site in Amazon’s delivery sequence, where products are sorted and stored before being boxed for shipping.

“Amazon’s facility will be located in the Eastern Iowa Industrial Center out by I-80,” Matson said. “If you’ve been out there, you might be seeing or already seeing some dirt being moved.”

Paul Rumler, president and CEO of the Quad Cities Chamber of Commerce, said this is “a big win” for the region.

“Amazon will invest $250 million…That’s a huge influx of money into our community,” he said. “On an annual basis, this will have at minimum an economic impact of $148 million.”

Rumler said that’s the yearly impact of Amazon salaries for a thousand workers, plus Amazon’s spending in the area to support the center. The Quad Cities Chamber of Commerce fielded Amazon’s first inquiry about building in Davenport in November of 2020, as the company sought information about the labor market.

“Obviously workforce is the top issue on just about every employer’s mind,” Rumler said today.

Rumler estimates there are 30,000 recent college graduates within a 60 mile radius of the Quad Cities.

“We’re talking about anybody with a college associates degree or certificate all the way up through a bachelor’s degree, so we have a wide group that we can attract here within our labor shed,” Rumler said. “Our labor shed market expands all the way up to Cedar Rapids, Dubuque, Galesburg and we draw people from outside the region who want to come work in the Quad Cities area.”

The Des Moines Register is reporting Amazon is also building a warehouse in Council Bluffs where packages boxed at a center like the one in Davenport are then sorted based on where they’re to be delivered.