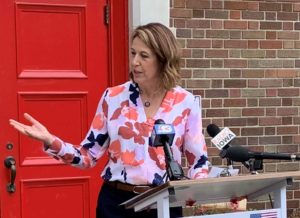 The new credit was included in the pandemic relief package passed in March and starting next week low and middle income parents of kids under the age of six will get $300 a month through the end of the year, while parents of kids who’re six through 17 years old will get $250. Axne, a Democrat from West Des Moines, said almost 200,000 Iowa families qualify.

“This isn’t just a handful of people. Eighty-five percent of Iowa families are going to see support on a monthly basis to help them out,” Axne said. “…This is four out of five Iowa children who will qualify for this benefit.”

The last federal child care tax credit payment will be made in December. Axne held a news conference outside a Des Moines preschool today to tout the program’s potential to help current and future parents.

“We know too many people are deciding not to have kids just because of the cost, so it’s time to support young people. It’s time to support working families and ensure that they can raise their kids successfully and be prepared for the world,” Axne said, “and this tax credit will directly support that.” 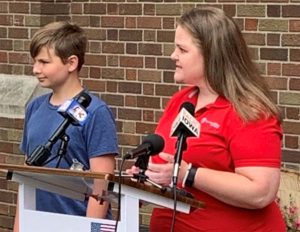 Tiffany Welch and her son.

Tiffany Welch of Clive and her husband have two children. She brought her 13-year-old son to the news conference.

“If these expanded tax credits had been available 12 years ago when he was a baby and I was trying to afford child care, I would have been able to keep working in the job that I loved,” she said. “Instead, I had to quit to stay home because it was taking two-thirds of my pay to keep paying child care.”

Reverend Robyn Bles, pastor of the Wakonda Christian Church in Des Moines, is a single mom who may use some of her tax credit to pay for swimming lessons.

It also means for my daughter but also for other single parents households, we can now afford better quality food for our children,” Bles said during the news conference, “…the apples that my four-year-old will just grab and walk around eating as she is playing.”

Some critics have questioned making these tax credits permanent based on the cost, while others say there may be better, more targeted ways to spend the money to improve the ecomomic prospects for low income adults and children.