You are here: Home / News / DNR wants to know about wild turkey sightings 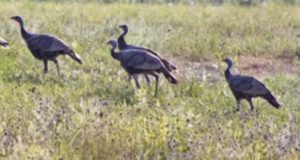 The Iowa Department of Natural Resources is asking for your help in counting wild turkeys. Wildlife biologist, Jim Coffey coordinates the turkey tracking.

“During the month of July and August, we look for the general public to report any turkey sightings that they see. What we are really looking for is a way to count this year’s production — so this year’s poults that are produced,” Coffey says. Coffey says the wild turkey population changes dramatically after nesting.

“They’ll have about ten to 12 eggs. Of that, about 95 percent of those eggs will hatch. So on day one, they could have ten poults — but as quickly as four weeks later they could be down to zero or five poults,” according to Coffey. “So half of those poults are expected to die in the first four weeks.” He says the young birds must survive the weather and predators.

Coffey says wild turkeys can be spotted across the state. He says they mainly live in the forest, but spend a lot of time in pastures and hayfields this time of year. “One of the main diets of the poults is bugs — so any place there is lots of bugs they are going to be moving around and feeding — eating that high-quality protein that makes them grow quickly. So you can expect to see turkeys all across the state of Iowa in all 99 counties,” he says.

If you do see wild turkeys, you are encouraged to visit the DNR website and report the sighting. He says you can go to the hunting tab and click on “turkeys.” There will be another tab where you can report the number of turkeys and the number of poults that you saw.

Coffey says wild turkey populations have seen a recent rebound. “We had pretty poor production two years ago, and then good production last year,” Coffey says. “We are kind of concerned about southeast Iowa — it tends to be the part of the state that has had the least production over the last ten years. But turkey numbers can fluctuate quite dramatically from year to year.”