You are here: Home / News / Iowan writes book about her bike rides in all 50 states 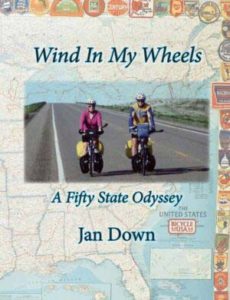 An Iowa City woman has accomplished a bicycling feat that would be the envy of any RAGBRAI rider: Jan Down and her husband Jim have biked across all 50 states.

Down wrote a book about the adventure, which was 26 years in the making, called “Wind In My Wheels: A Fifty State Odyssey.” It’s equal parts travel journal, cycling log, and memoir that covers an incredible distance and a “life-changing” trek.

“The total eventually that’s covered in the book was about 25,000 miles,” Down says. “This all started with RAGBRAI #6 in 1978. That started our bicycling journey and desire to just keep riding.”

The 81-year-old Down says they rode across each of the 48 contiguous states border-to-opposite-border, while they did a massive loop in Alaska and circled the Hawaiian islands. The inspiration to undertake such a journey sprouted during a family vacation nearly 40 years ago.

“We rode four RAGBRAIs in fairly short order and then decided to take our three daughters on a New England ride where we biked from New Jersey to Canada and back again,” Down says. “That was when we decided that we would cross all 50 states.” The two-and-a-half decades of vacations and many thousands of miles of pedaling gave the Downs a new portal through which to view the world, to meet people, to admire the diverse beauty of America, and to do so at a slow pace.

“It’s a great way to see the country and to feel more of a part of some of the areas that we went through and understand the people, though we didn’t get to know them as intensely as we would’ve liked to,” Down says. “It still gave us totally different perceptions than it would have had we just ridden by in a car.”

For anyone who would like to try and duplicate the Downs’ journey, she says to start by buying yourself a good quality bike and gear, including gloves and a helmet. She recommends taking bike trails, when possible, and then, open yourself up to learning about yourself — and how to push yourself.

“Bicycling did that for me and that was increased my awareness of how far and how long I could go, not just in biking but in hiking and in doing other things,” Down says. “It improved my self-confidence. It was really a life-giving, life-changing type of thing.”

The Downs have gone on to tackle other accomplishments, from climbing Mount Kilimanjaro to building houses internationally through Habitat for Humanity. Down and her husband are northwest Iowa natives. She grew up on a farm near Merrill while he’s from Le Mars.

The 410 page book is available now through the North Liberty-based Ice Cube Press.