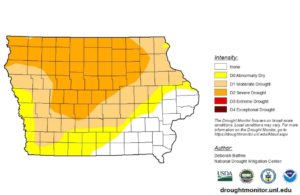 Recent rains have helped with dry conditions — but they have been spread out and some areas of the state could use much more rain.

The Iowa DNR’s Tim Hall says severe drought conditions expanded in June from 12 counties in northwest Iowa across nearly all of northern Iowa. “Sixty-two percent is now severe drought — up from only about eight percent at the beginning of the month,” Hall says. “So that is a significant uptick in coverage of the D-2 drought.”

While the severe drought has spread across the state — the rain we did get in June was beneficial. “June was drier than normal. Normally we get about five inches of rain. We ended up getting about three inches. That three inches of rain certainly has helped to push off any of the real severe conditions that we might otherwise be seeing right now,” according to Hall. Streamflow conditions across approximately half of the state remain in the below normal condition.

Hall says other states are in worse shape coming out of June. “As dry as it is in Iowa, it gets progressively worse as you go north and west into the Dakotas and Montana,” Hall says. “And the prediction in the Missouri River basin is that the runoff north of Sioux City could very well be the tenth lowest on record, going back to the late 1800s.”

He says that is a big contrast to the flood fears on the Missouri River in the last couple of years. “The Missouri River is in as bad a shape as anything we’ve got here in the state. And it does not look like they are going to come out of that anytime real soon,” Hall says.