You are here: Home / News / Bluegrass festival returning to Stratford 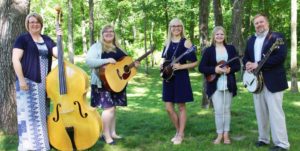 More than a half-dozen bluegrass and old-time country music bands will entertain the crowds this weekend in the north-central Iowa town of Stratford in Hamilton County.

Organizer April Carlson is expecting big audiences for the Stratford Stride Bluegrass Festival, which is returning after a one-year hiatus due to COVID-19. Carlson says seven bands will be featured from multiple states, along with plenty of food and a parade on Saturday starting at 10:30 a.m.